Have you ever wondered how a caterpillar turns into a butterfly? This amazing change in body form, from a soft, fat worm-like creature to a light and fragile flying insect, is called metamorphosis and it all happens inside a special hardened casing called a chrysalis. 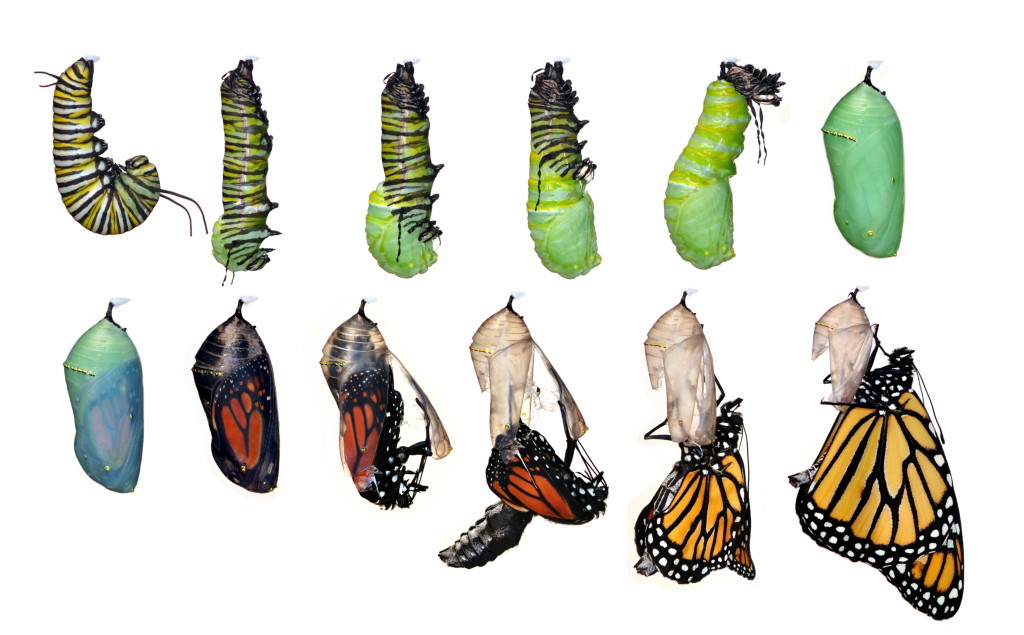 In this image, a monarch caterpillar is shown changing into a chrysalis, then coming out, or “emerging” as an adult monarch butterfly.  For the monarch, this process takes 2 weeks, while for other butterflies it may take up to a few months.

First, the caterpillar, fattened up from weeks of munching on leaves, finds a safe place, usually on the underside of a leaf.  It produces a special glue to stick its tail to the leaf then it sheds its skin.  The new skin underneath becomes a hard outer covering, like a shell. The animal is now called a pupa, or chrysalis.  Inside its hard covering, big changes start to take place!  The animal starts to build four wings, six legs, two antennas, two big eyes, and a long mouth like a straw for sucking up flower nectar.

When all of these body parts are ready, the animal opens its hard covering and comes out into the world as an adult butterfly, also called an imago.  The hard casing of the chrysalis is left behind and sometimes you can find empty ones after the butterflies have hatched from them.

What an incredible change!  Can you imagine eating a whole lot, going to sleep for 2 weeks, and waking up with wings?