Food chains on land start with plants and move up level by level, showing which creatures eat which. In the oceans, also known as the marine environment, food chains also work in much the same way. Let’s look at one food chain that could be found in the sea.

Primary Producers – Just like plants on land, these marine creatures use the sun’s energy and both water and carbon dioxide to make their own food.  But in the oceans, primary producers are a mix of different living things that float at or near the water’s surface.  Algae are the most well-known of these organisms which are all together called phytoplankton. 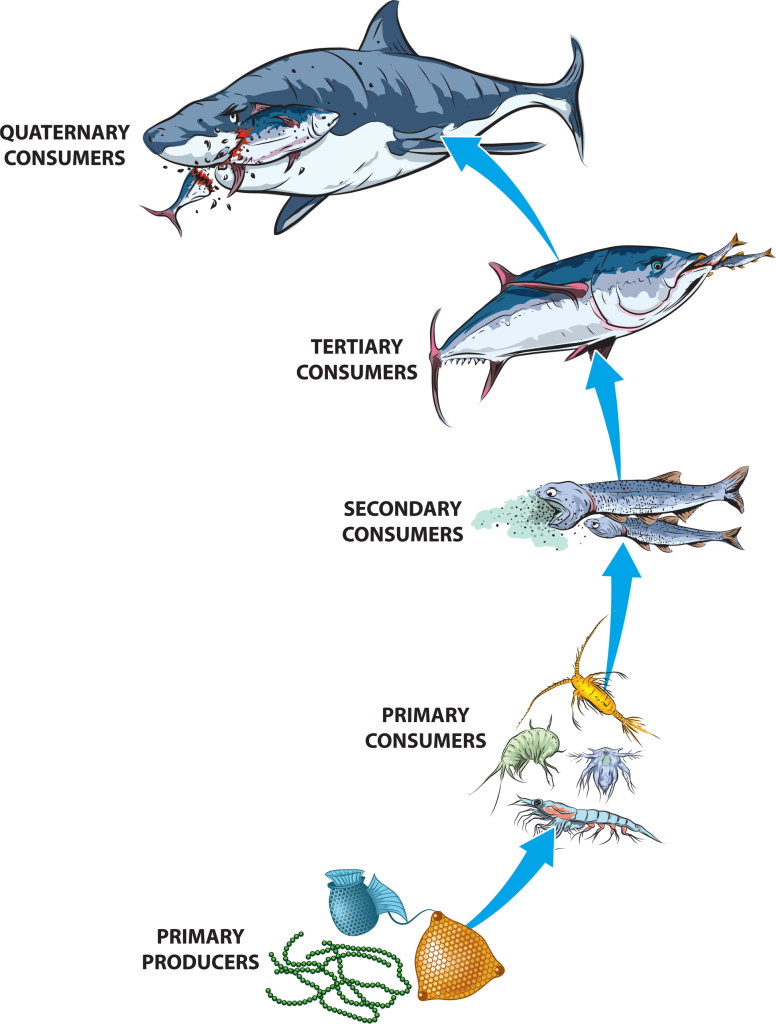 Primary (level 1) Consumers – Consumers are living things that can’t make their own food and so they eat other living things.  In the ocean, many types of tiny, floating animals like crustaceans (sometimes called krill), eat phytoplankton.  These creatures are known as zooplankton, since they also float around on the water.

Secondary (level 2) Consumers – At the next link in our food chain, we find animals that eat other animals (and don’t eat producers).  In our example, small fish that filter tiny zooplankton out of the water to eat are secondary consumers.

Tertiary (level 3) Consumers – These fish are eaten by bigger, predatory (‘hunting’) fish, such as muskie, perch, and salmon.  The bigger fish are called tertiary consumers.

Quaternary (level 4) Consumers – At the top of our marine food chain is a shark, which would feed on large predatory fish (and also many other types of animals), making it a level 4 or quaternary consumer.

Have you ever eaten shark?  If you have, you can put yourself at the top of the food chain!