Tsunami, are dangerous natural disasters caused by large movements of rock in the ocean or by extra-terrestrial bodies. While these giant waves may hardly be noticeable out at sea where the water is deep, they quickly start to rise much higher than normal waves when they come in to shore.  Waves tens of meters tall have incredible energy and can demolish entire cities causing terrible devastation.  Here are the main causes of these destructive waves. 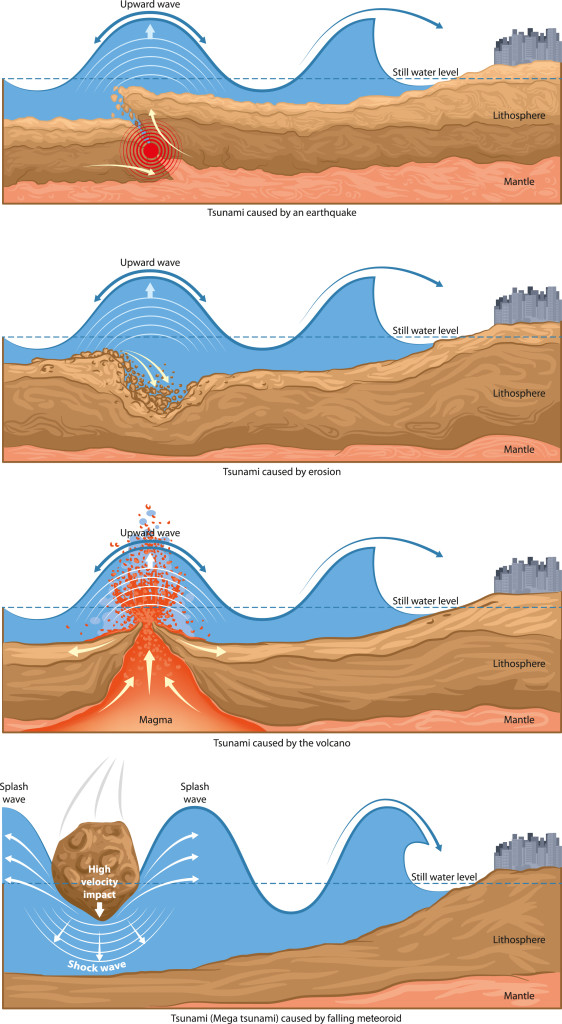 Undersea Earthquakes – Powerful earthquakes can happen at the boundaries of oceanic and continental plates.  Oceanic plates are heavier and slowly get forced down under lighter continental plates when they meet, but the downward movement, called “subduction” isn’t smooth.  Instead, the ocean plate may get stuck for a period of time while energy builds up, and then suddenly the plate slips down and that energy is released as an earthquake.  If this happens underwater, the earthquake can create a massive wave that could come to shore as a tsunami.

Undersea Landslides – The ocean floor is not flat, but instead has peaks and valleys just like the surface above.  And just like on land, unstable piles of rock and dirt can suddenly fall, creating a landslide.  Underwater landslides release a lot of energy and can also produce giant waves.

Undersea Volcanoes – Hot molten rock, or magma, under the ocean can suddenly explode up into the water.  The explosive force can push up a great wave that may become a tsunami.

Meteoroid Impacts – As if there weren’t enough dangers on earth, large rocks from space (meteoroids or even huge asteroids) can strike the earth and cause incredible damage.  If one lands in the ocean, it may create a big wave that expands outwards in every direction, millions of times bigger than just dropping a pebble into a puddle.

And what about volcanic eruptions?