The winter solstice is also known as the “shortest day of the year”.  This usually happens on December 21st or 22nd in the Northern hemisphere, and June 20th or 21st in the Southern hemisphere. Why does the solstice happen and what is going on when it does? 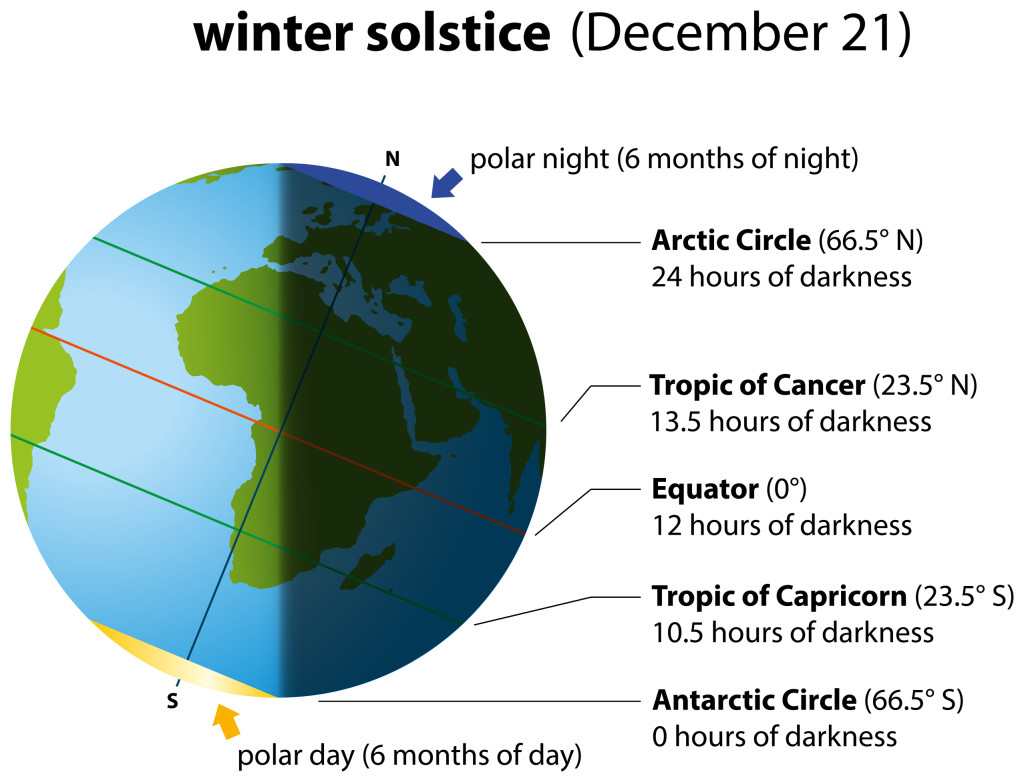 The reason why the solstice happens is this:
The axis of the earth’s rotation is tilted 23.5 degrees from the perpendicular to the plane of its motion around the sun.
Think of the earth as a ball orbiting around the sun, a much bigger ball, on a flat surface.  This surface is the plane of the earth’s orbit.  The earth goes around the sun once a year, but it also turns around on an invisible axis that runs from the North Pole to the South Pole every 24 hours.  The problem is that the axis doesn’t come straight up at a 90 degree angle from the flat surface.  Instead, it’s tilted 23.5 degrees away from that 90 degree line.

During the northern hemisphere’s winter solstice (December 21 or 22), the sun sits directly overhead of the Tropic of Capricorn at noon, and places at this latitude have their shortest night of the year.  Traveling further south, there is more and more daylight and shorter night up to the Antarctic Circle.  Above this imaginary ring at 23.5 degrees latitude, the sun doesn’t ever go down!  The tilt of the earth makes daylight last 24 hours!
Traveling north from the equator, every latitude will receive less light and heat from the sun.  North America and Europe become cold and dark, and from the Arctic circle northward, the sun doesn’t even rise on the solstice!