An avalanche is large amount of snow that falls from a high position and slides down a slope.  If you’ve ever been hit by a single little snowball, you can imagine how much energy and force would be contained in a massive wall of tons of snow travelling at a speed of over 300 km/h.  So what causes avalanches to happen? 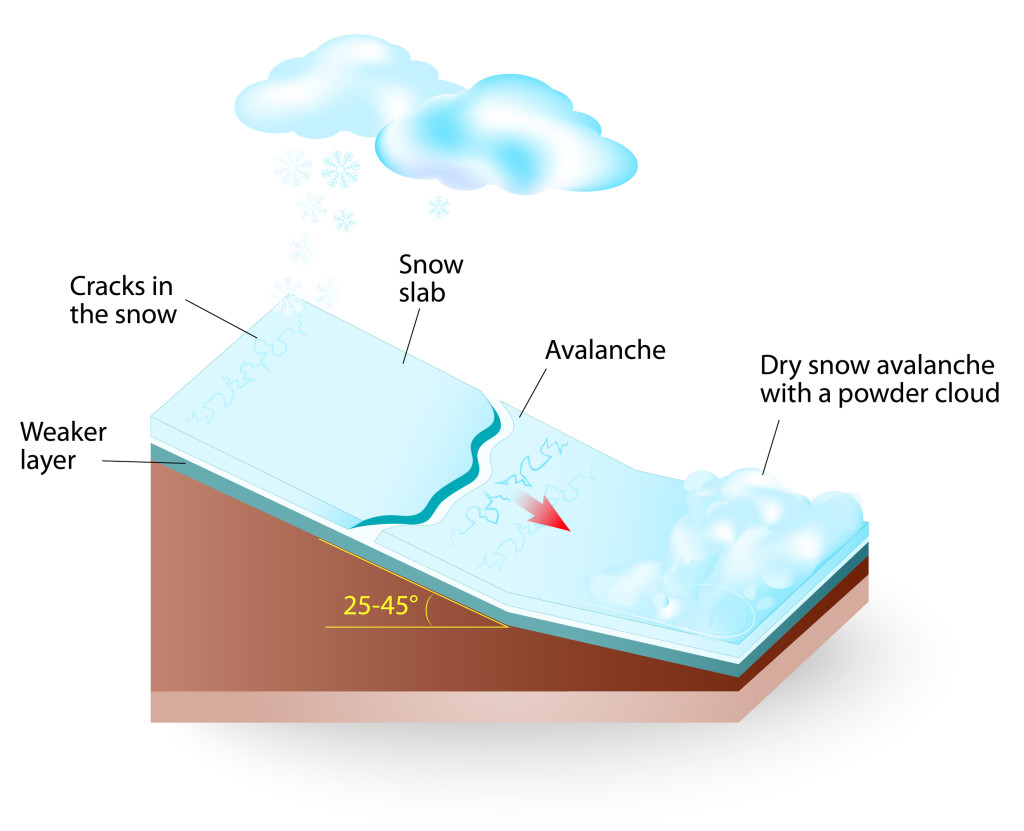 First of all, avalanches don’t happen on flat ground, which should come as no surprise.  However, they don’t happen so often really steep slopes either!  This is because it’s hard for really big amounts snow to build up on these slopes.  The most likely areas where avalanches will occur is on slopes of between 25-45 degrees, where snow can build up and also slide with increasing speed.
Next, snow falls at different times and produces different layers in what is called the snowpack.  Snow that falls and is quickly frozen into the underlying snowpack is relatively stable and less likely to slide.  However, if a layer is formed, often by a deep frost or certain types of really light snowfall, this can become a weak layer.  If the weak layer is covered by new snow, that new snow is not stuck well to the snowpack under the weak layer, and therefore it will be prone to avalanche.
Finally, weather can be an important factor.  Warm weather can melt snow and lubricate the movement of a snow slab.
Cracks first form above a slab as it slowly loses its connection with the underlying snowpack.  With the right weather, loading of fresh snow, or a skier or snowboarder hitting it, a slab can fall and become an avalanche.  As it moves down the slope, the force of the avalanche picks up and moves along the snow that it passes over.  Dry snow on top of the falling slab can mix with the air and accelerate so that it flows much further than the crumbling slab as a powder avalanche.