Carbon is the basis of all life on earth and is hugely important in helping to regulate the climate of the whole planet. But just where in the world is all this carbon coming from and going to? Find out more about global carbon cycle! 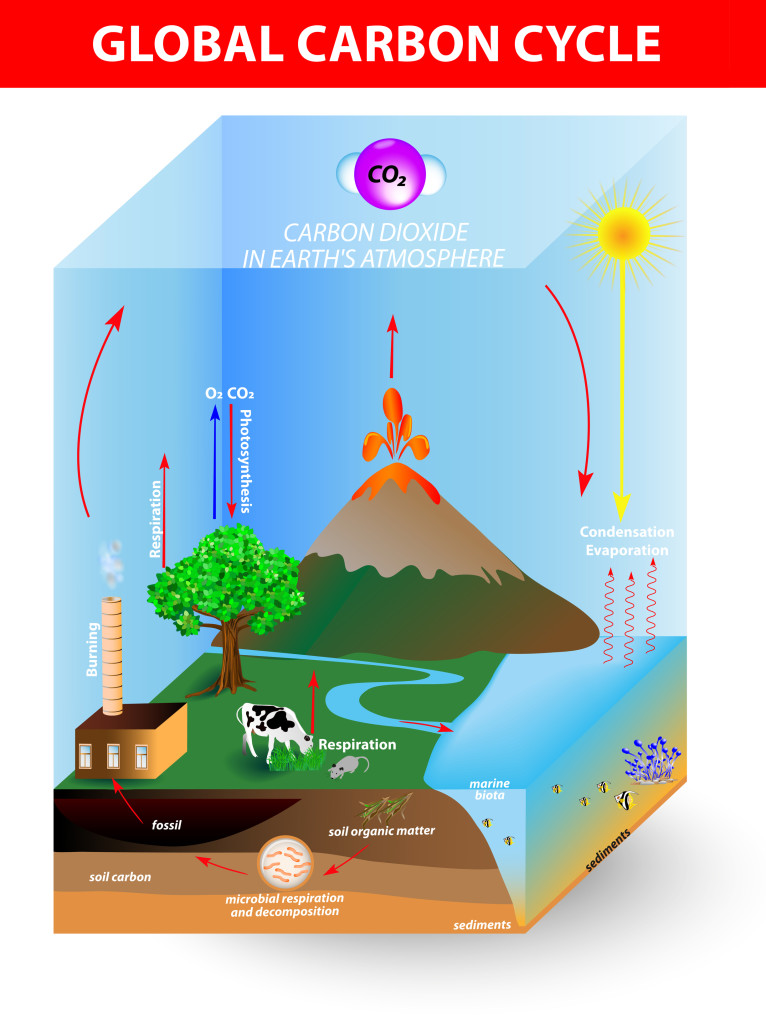 Atmospheric Carbon Dioxide – Only about 0.04% of the earth’s air is carbon dioxide gas, however this gas plays an important role in trapping heat from escaping the earth into space.  CO2 can be added to or taken out of the atmosphere in many different ways.

Photosynthesis (-) – In photosynthesis, plants take in water and carbon dioxide, release oxygen, and store carbon in their structures as different carbohydrates.  So plants trap carbon, but what happens when they die?  They can be broken down in the soil, when carbon is also stored, but if they are burned (like wood) then carbon is released back into the atmosphere.

Marine Deposits (-)– Lots of carbon gets washed out of the earth or washed out of the air by rain.  This carbon eventually makes its way to the oceans where it can be stored as stone, usually limestone.  Marine animals, especially corals and plankton, also store carbon in their bodies and this gets turned to rock after they die.

Respiration (+) – When we and other animals breath in, we take in air, pull out the oxygen, and add carbon dioxide to it before breathing it back out. Even plants do this, at night when photosynthesis can’t happen.

Burning Fossil Fuels (+) – Carbon that was held in ancient plants and broken down by soil bacteria can be trapped underground, and with heat and pressure, slowly converted to oil and gas deposits.  This is what we use to power our cars and factories, but burning these fuels releases CO2 back into the atmosphere.

When you’ve learned what global carbon cycle is, then find out more about tectonic plates!