On a simple diagram, the sun, moon and earth would all look similar – like round balls floating around the sky. The truth is that they are 3 different bodies with very different insides and outsides. Find out more about composition of the Sun, Earth and Moon! 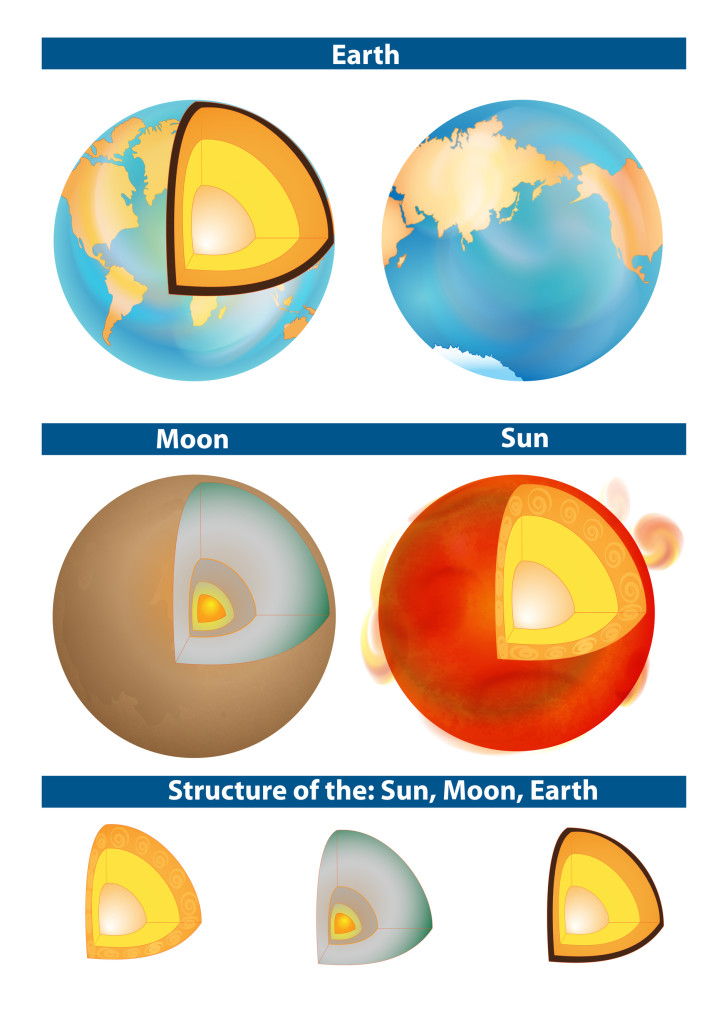 Sun – The sun is a star about 330,000 times the size of the earth.  It is composed of about ¾ hydrogen and ¼ helium, with a small percentage of other, heavier elements.  Deep in its core, the sun is extremely dense and hot, with temperature reaching over 15 million degrees Kelvin.  The energy from the sun comes largely from the core, where nuclear fusion of hydrogen atoms into helium atoms takes place.  Above the core is a zone where energy radiates outward, called the radiative zone.  The last section of the sun is the convective zone, where energy from the inside of the star drives cycles of heat and matter.  At the surface of the sun, the temperature is much cooler than the core – only 5700 degrees Kelvin!

Earth – Next up, the earth also has a radioactive core, but it is one made of solid metallic elements like iron and nickel surrounded by a liquid outer core of the same material.  The radioactivity in the earth’s core drives convection in the mantle, the thick layer of stony material that makes up most of the earth’s mass.  The inner part of the mantle is nearly melted by the heat of the core, while the outer part is nearly solid stone.  We live on a thin skin of solid rock called the crust, under an atmosphere of breathable gases.

Moon – The moon is a piece of the earth that was blasted off by an asteroid impact and formed into a smaller sphere that orbits the earth.  Because of this, it shares some of the same geology as the earth.  It also has a solid inner core and liquid outer core of radioactive material, but this core is much smaller than the earth’s.  Above the core is the mantle, with a thick layer in between of partially melted stony material.  The surface of the moon is similar to its mantle, and it has only the slightest atmosphere.