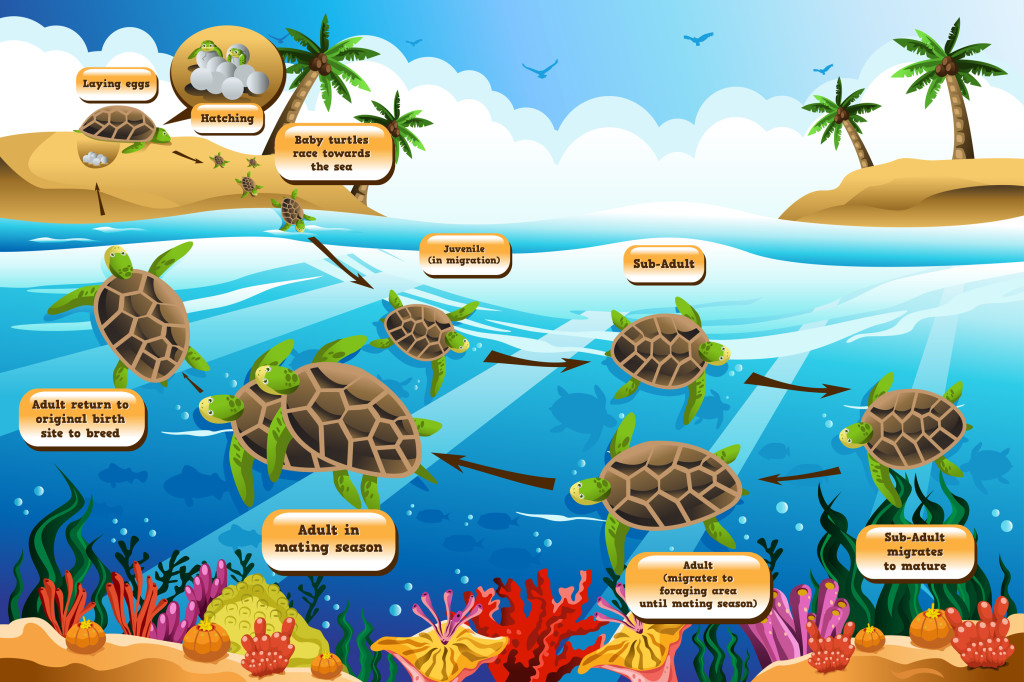 Hatching – Baby turtles usually hatch at night, though some will also come out during the day.  They break through their eggshells and then dig up through the sand of their nests.  The babies are very vulnerable on the beach, so they race into the ocean’s waves before birds and other animals can catch them.

Juveniles – Babies are unable to fight against the powerful ocean currents and are usually swept out to sea where they can eat sea grass and plankton for a few years up to a decade.  They develop into juveniles in the open ocean.
Sub-adults – Before they are sexually mature (able to make babies), young turtles grow to sub-adult age and begin to migrate towards shore where they can feed on many more types of food, but where there are also more predators.  It may take years to decades for sub-adults to reach sexual maturation.

Adults – Adult turtles, those that are able to mate and produce babies, travel to mating areas to meet other individuals of their species.  These areas can be thousands of kilometers away however they are located near nesting beaches.
Mating – Females may mate several times during a single season, laying anywhere from 1-8 clutches of eggs.  Mating pairs form, mate, and then separate with males looking for new partners or returning to feeding areas, while females head to beaches to lay eggs.

Nesting and Egg Laying – Female turtles dig holes in beach sands at night and lay between 50-200 eggs in their nests.  The nest is then covered with sand and the eggs mature for 60-80 days before babies hatch.  Many predators eat turtle eggs and human development of beaches also threatens turtle populations.

Wrap up your teaching with amazing turtle coloring page here!