At the beach, it may look like water just moves back and forth along a straight line as waves come in and roll back out. However, the oceans of the world are all connected in a large and complicate system. Water moves around the oceans in general patterns called ocean currents, and these currents are extremely important! 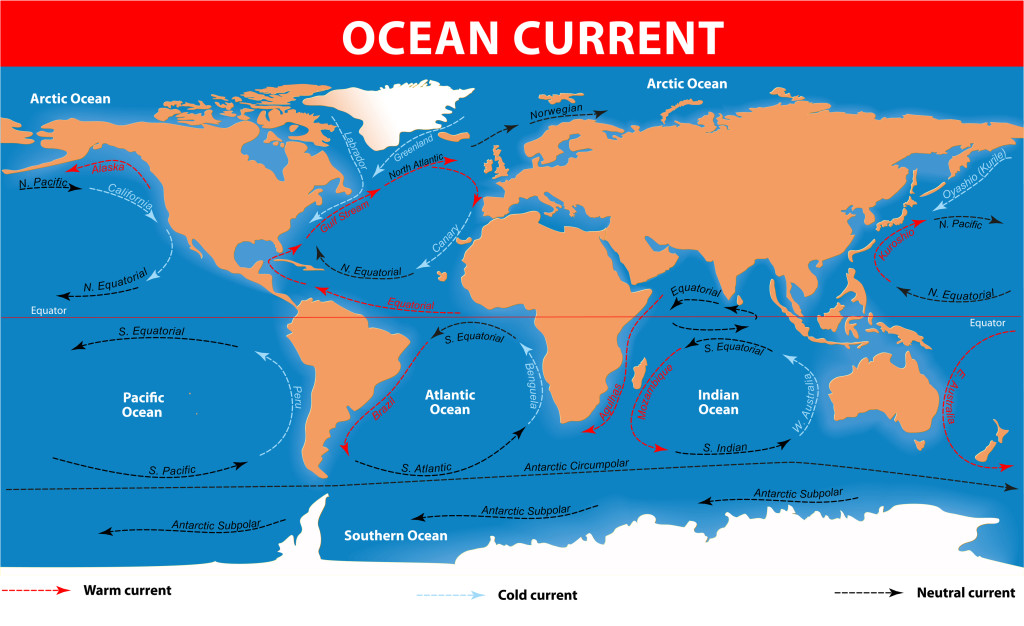 Effects of Currents – Ocean currents move water around the world and have a huge effect on life on earth.  They mix up fresher and saltier water, cooler and warmer water, and lifeless water with nutrient rich water that is full of life.  This mixing helps the lives of marine animals.  On land, the main effect is to regulate temperatures – warm water moves away from the equator towards the poles and this helps to heat up very northern and southern areas.  Without ocean currents, most of Europe would be too cold to live in!

Gyres are huge areas of ocean water circulation.  They are caused by two effects – different temperatures and the turning of the earth.  The hottest part of the world is at the equator, while the coldest regions are the poles.  Since warm water expands, there is a natural movement of warm water away from the equator – northwards in the northern hemisphere, and southwards in the southern hemisphere.  The earth also turns anti-clockwise on its axis (right, on our map).  This makes water get pulled in the direction of the rotation, so that warm currents (our red arrows) tend to go north and east in the northern hemisphere, and south and east in the southern hemisphere.

Of course, moving warm water away from the equator also makes cool water flow towards the equator (white arrows) to take its place.  This closes the cycles of the major gyres in the oceans.

Find out more about magnetic poles!