It may or may not be true for people, but for magnets, opposites really do attract! 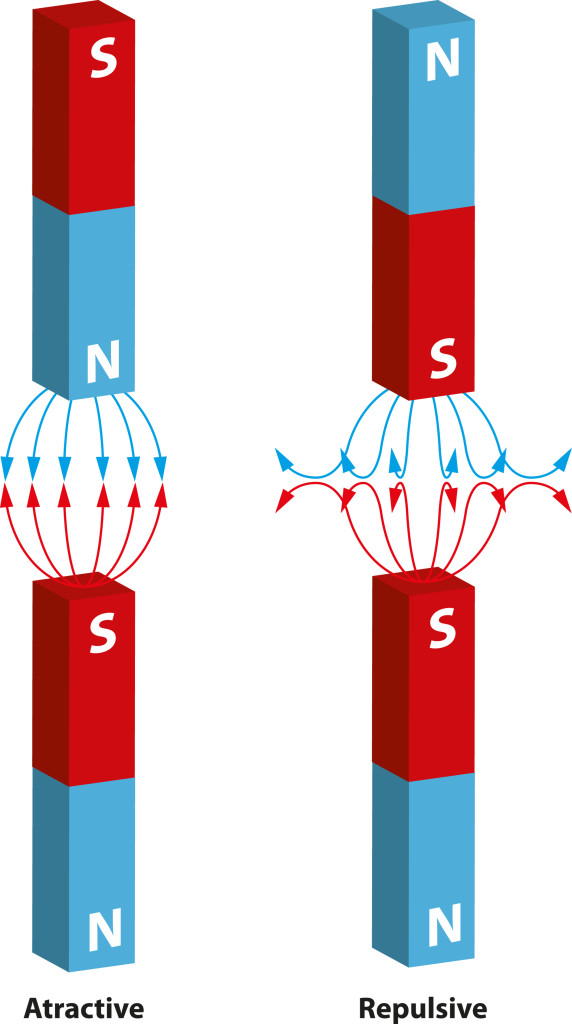 Magnets – What are magnets?  Well, in general they are objects, usually pieces of metal, that hold a permanent magnetic field.  What does that mean?  It means that they always create magnetic fields which radiate out from them, just like in the pictures you can see here.

Magnetic Poles – Magnets send out their magnetic fields in a set direction, so that a magnet will have something like and “in” end and an “out” end.  We call these north and south poles.

Attractive Force – While both ends of a magnet normally attract other objects, a very strong attraction forms when a north pole of one magnet comes close to the south pole of another magnet.  They will be pulled firmly together, and it can be difficult to pull them apart!

Repulsive Force – A stinky smell might repulse you, but for a magnet there’s nothing more repulsive the pole of a magnet than meeting the same type of pole.  That’s why two north or two south poles will always push each other away.  Have you ever tried pushing two same poles together?  It’s really hard to do!

Earth is a Magnet – Scientists believe that the center of the earth, the core, is made of iron and nickel and that’s why the earth has a magnetic field that pulls compass needles to line up with its north and south poles.  But remember, the magnetic poles move over time, so they’re not in the exact same places as the earth’s North Pole and South Pole.