Tornadoes are hugely powerful, swirling vortexes of air that normally form during violent thunderstorms. The stronger the storm, the more powerful the winds in the tornado become. In order to judge the strength of a tornado, and plan for disaster relief, many countries use a special rating scale called the Enhanced Fujita Scale. 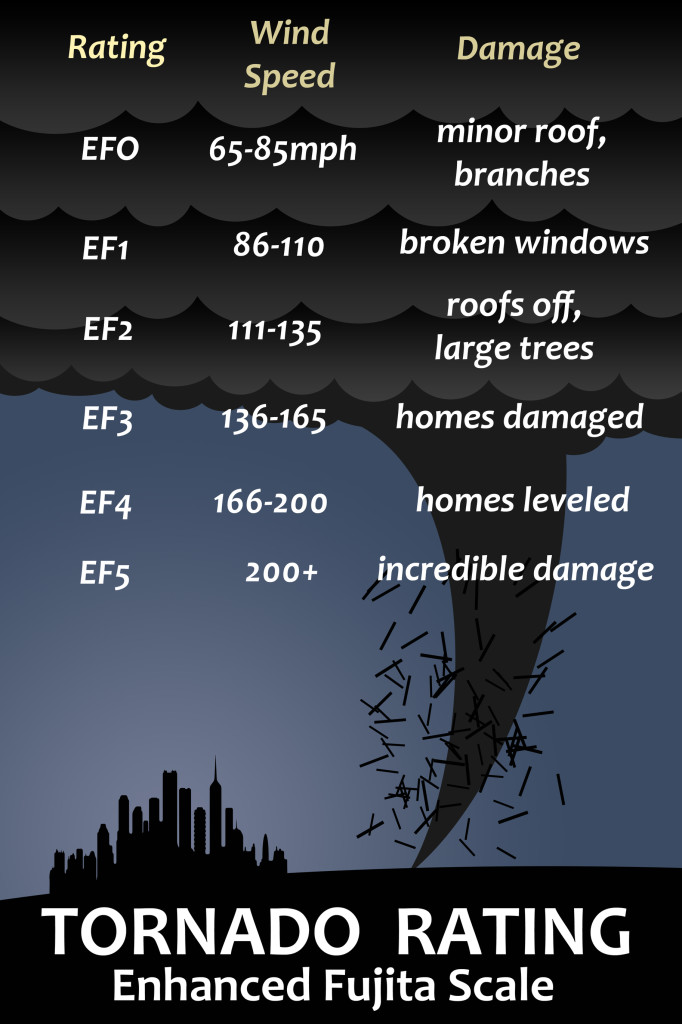 EF0 = This rating is given to small and minor tornadoes that cause very little damage.  These twisters reach wind speeds of 137 km/h (85 mph).  These tornadoes may damage trees but would not normally damage buildings.

EF1 = Tornadoes reaching wind speeds of up to 177 km/h (110 mph) and causing minor damage to trees and buildings (like ripping off some roof tiles and breaking windows) are given this rating.

EF2 = At wind speeds up to 217 km/h (135 mph), tornadoes are given a rating of EF2.  Many houses will have their roofs ripped off by these tornadoes and large trees can be blown down or even ripped out of the ground.

EF3 = Tornadoes reaching wind speeds of 266 km/h (165 mph) are considered intense and dangerous.  Many homes, especially those made from wood, can be badly damaged.

EF4 = At wind speeds of 322 km/h (200 mph), tornadoes are violent and can level houses and forested land, leaving terrible destruction.

EF5 = When tornadoes start to spin at over 322 km/h (over 200 mph), destruction is extreme and entire parts of cities, even concrete and steel buildings and heavy trucks, can be completely flattened.

Find out more about tornado formation!