Our sun is a star with 8 planets (9 if you count Pluto), including earth, orbiting around it.  This is our solar system.  It’s composed of 4 inner ‘stony’ planets and 4 outer ‘gas giant’ planets, with an asteroid belt separating them. 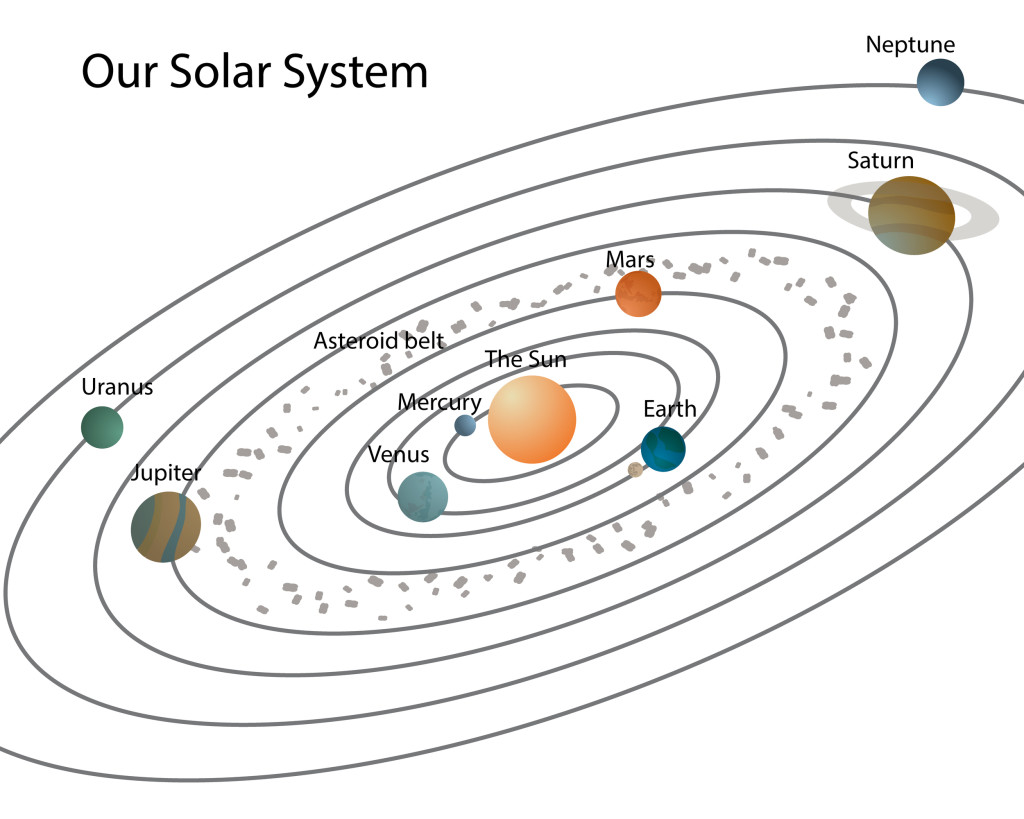 Mercury – Mercury is the closest planet to the sun and because of this, it also has the shortest year of all the planets.  It orbits around the sun once every 88 earth days.  Mercury has almost no air to hold in heat, so its temperatures range from −173 °C (−280 °F) to 427 °C (800 °F) – sounds a bit uncomfortable, doesn’t it?

Venus – The next planet, Venus, is also the brightest object you can see in the night sky after the moon, especially in the morning and evening.  It is the hottest planet in the solar system and has a really thick, heavy atmosphere composed of poisonous and filled with violent storms.

Earth – Earth is sometimes known as the “3rd Planet” since it is the third one away from the sun.  Earth is the only planet in the solar system to host liquid and frozen water, and (as far as we know) life!

Mars – Mars is also known as the “Red Planet” because of its covering of red rocks.  Mars is covered in impact craters and extinct volcanoes, and recent pictures of the planet show that it has some frozen water on it, making it the planet in the solar system most like Earth.

Asteroid Belt – Between Mars and Jupiter is a large distance where scientists believe there should have been another planet.  They think that Jupiter’s gravity stopped the planet from forming so instead this region of space is filled with small chunks of rock called asteroids, some of which can break away from their regular orbits and crash into other planets – including ours!

Jupiter – Jupiter is an enormous planet called a gas giant because it is mostly made out of gas and liquid and not stone like the Earth.  It’s 2.5 times heavier than all the other plants put together!  The planet is known for a huge red spot on it that’s really an enormous cyclone about the size of the Earth, as well as for having at least 67 moons!

Saturn –Saturn, is another gas giant.  Saturn’s famous rings are made of rock and ice orbiting the middle of the planet.  Saturn has at least 62 moons, and get this – it’s so far away that it takes over 29 Earth years for Saturn to orbit once around the sun!

Uranus – The third largest planet in the solar system is the ice giant Uranus, which is made mostly of frozen water and other gases.  This planet also has the coldest air, with temperatures sometimes dropping down to −224.2 °C.  Uranus takes 84 Earth years to orbit the sun!

Neptune – Neptune and Uranus are very similar ice giant planets.  The blue planet of Neptune is about 30 times as far away from the sun as the Earth is, so it takes an incredible 164.79 Earth years to orbit the sun!

Pluto – Poor Pluto used to be called a planet, but in 2006 it was changed to a dwarf planet instead since scientists have also discovered many other objects on the edge of the solar system that are similar in size and material to Pluto.  This rock and ice ball is about 1/3 the size of Earth’s moon, but it has 5 of its own moons.  It takes almost 250 Earth years for Pluto to orbit once around the sun!

Learn more about the planets in the solar system!

Phases of the Moon