Thunderstorms are high energy weather events that can be very exciting and potentially very dangerous. They can include towering clouds, strong winds, torrential rains, hail, lightning, and sometimes even tornadoes! 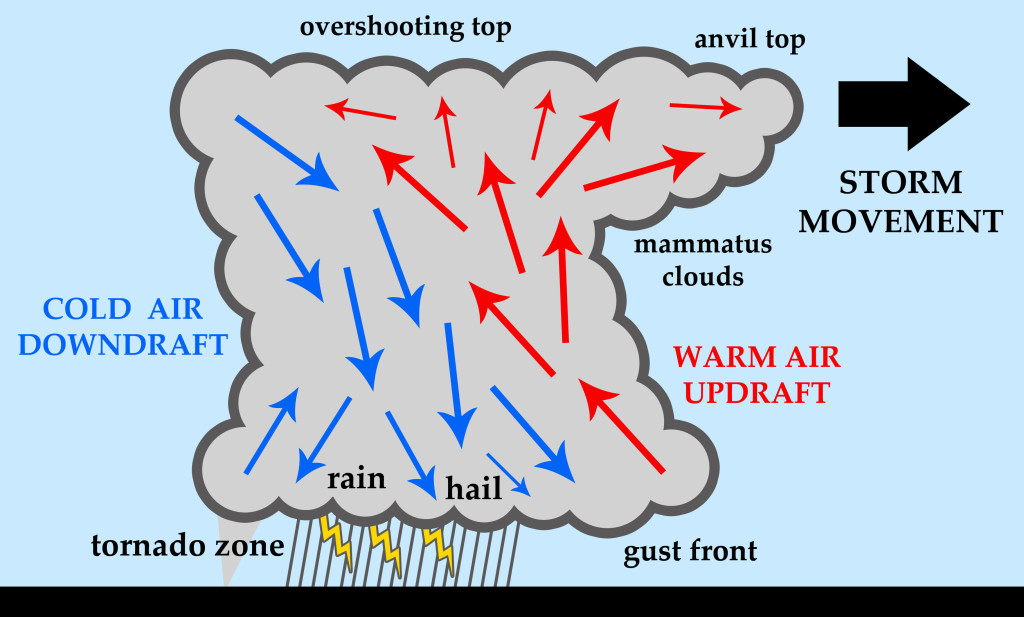 Cumulonimbus Clouds – Also known as “thunderheads”, these billowing clouds can build up as high as 20km tall, where they hit a level in the atmosphere called the tropopause.  At this level, and because of strong winds at high elevations, these clouds form flat stretched tops which make them look like anvils.  Warm, moist air expands and moves up through the cooler air above it, and cools as it rises.  The updraft in a cumulonimbus cloud can be very strong, especially on a very hot day with a lot of wind, and can lead to violent weather.

Rain and Hail – As the warm air cools to its dew point temperature, the moisture in it starts to condense into water droplets, forming a cloud.  If there is a very strong updraft in the cloud, these droplets can be pushed upwards in the cloud where they can freeze into ice pellets.  Sometimes, the droplets of water or ice pellets fall down but get pushed back up by the updraft, and this can happen several times.  Each time, they stick to other droplets and get bigger and bigger until they are finally heavy enough to fall as big raindrops or big hailstones.  The stronger the storm, the bigger the drops or hail can get, which is why the biggest, most damaging hailstones almost always fall in the hottest summer months!

Lightning and Thunder – The movement of raindrops or ice pellets moving past each other up and down through a thunderhead creates a large electrostatic charge (like rubbing a balloon on your hair), which gets released as strikes of lightning within the cloud or down to the earth.  The sound created by an explosion of lightning through the air is the thunder you hear, often much later than the lightning you see if the storm is far away.

Tornadoes– Heavy rains falling from the back of a thunderhead can pull down a lot of cold air with them, while at the earth’s surface, warm air is moving forward and up into the storm system.  In very severe storms, this can create high intensity spinning winds called a tornado.  Tornadoes can be extremely destructive and can even rip apart concrete and steel buildings!